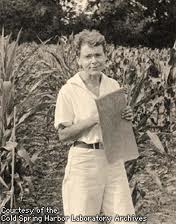 From the beginning of her life, Barbara McClintock knew she was different. Born in 1902 in Hartford, CT, she was never content being a “good girl”, or later, becoming “ladylike”.  She loved to play sports with the boys, and she relished learning, even those most “unladylike” subjects, math and science.

Luckily, Barbara’s parents were themselves mavericks.  They encouraged her to be fully herself.  When a neighbor woman tried to lecture Barbara on being “ladylike”, Barbara’s mother immediately called her and told her in no uncertain terms never to speak to Barbara again.

Barbara’s parents prized the individuality of all their children.  Barbara not only defied gender categories, she also defied social expectations.  She loved to be alone.  From babyhood, she could sit quietly by herself, just thinking while other children played together.  This gift for contemplation and concentration was the foundation for her genius.

Her genius was in the area of genetics. She worked on corn (“maize”) and she began surpassing even her mentors while she was still in college.  Her ability to identify individual chromosomes was her first huge contribution to the field.  Her list of published papers grew quickly as a grad student and post-doc, but she could not get a university job.  Most universities were adamantly opposed to hiring women instructors or researchers.

But Barbara had incredibly supportive colleagues, who rallied around her.  With their support, she got her first research grants, and a 5-year research position at the University of Missouri.  However, she was isolated from the overall university structure.  She wasn’t invited to faculty meetings, or included in other activities.  She knew she had to leave.

She ended up at Cold Springs Harbor, on Long Island in New York state.  What was supposed to be a short stopover at this venerable research institution ended up becoming a lifelong home.  While there, she would make her Nobel-winning discovery about the true nature of DNA.

The “central dogma” about genes at this time was that they were just inert packets of information.  They were like pearls on a string, and all the information was downloaded into the RNA, which coded proteins.  McClintock discovered that DNA was not so inert.  It could change positions.  It was self-regulating.  And the changes could be triggered by the environment.  Thus – the field of epigenetics was born.

She made these discoveries in 1951.  But the scientific community wasn’t ready to have their “central dogma” overthrown, and certainly not by this woman, this eccentric woman.  It took them a full 20 years before they realized that she had been correct all along.

To the credit of the scientific community, this is one woman who did get the rewards she deserved.  She got her Nobel in 1983, and received numerous other awards and recognitions as well.

What I admire most about her is that even when she was not being recognized for her achievements, even when she was being discriminated against for being a woman… she held fast to her individuality.  She didn’t try to change herself.  She decided in college to wear pants and cut her hair – it was just practical, given that she was in the corn field all day.  This of course caused shock waves across her campus (she went to Cornell).  But she knew from the time she was in high school that she was different.  She knew she would pay a price for being different.  And she made a very conscious choice to do as she like and pay whatever price she had to.  She prized loyalty to herself above social approval.

Today, we can see her attitudes and choices reflected in many women around us.  But in the 1920’s, being herself made her a radical.  But to manifest her genius in the world, she needed great courage.  We are lucky

indeed that she had that courage.