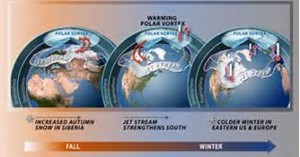 You may be looking at this weather across much of North America and thinking, well, so much for global warming! That’s a relief. We’re gonna freeze to death, but at least we won’t boil to death!

Actually… it turns out that global warming may be the culprit for this cold weather.

The first thing to remember is that our global climate and weather systems are quite complex. When new factors are introduced, such as the heating effect of carbon and other greenhouse gases, the effect won’t simply be “it’s warmer”. For example, it will be warmer, but it will also be wetter – warm air holds more moisture. So in some parts of the globe, flooding will become a problem, and in others, record-breaking snowfall.

Normally, that jetstream would move weather systems out more quickly, but now, it doesn’t have the speed to do that. So we have a polar vortex – a weather system that just keeps repeating, bringing in cold temperatures and lots of snow to the US and Canada, and ongoing thunderstorms and torrential rain to northern Europe.

Check out this video and report – it explains things very clearly:

So… global warming, and its chaotic effects on our climate and weather systems, is here to stay. The only question is – how bad will we let it get?

1 thought on “Global Warming and the Polar Vortex”