The Chaos Theory of Now 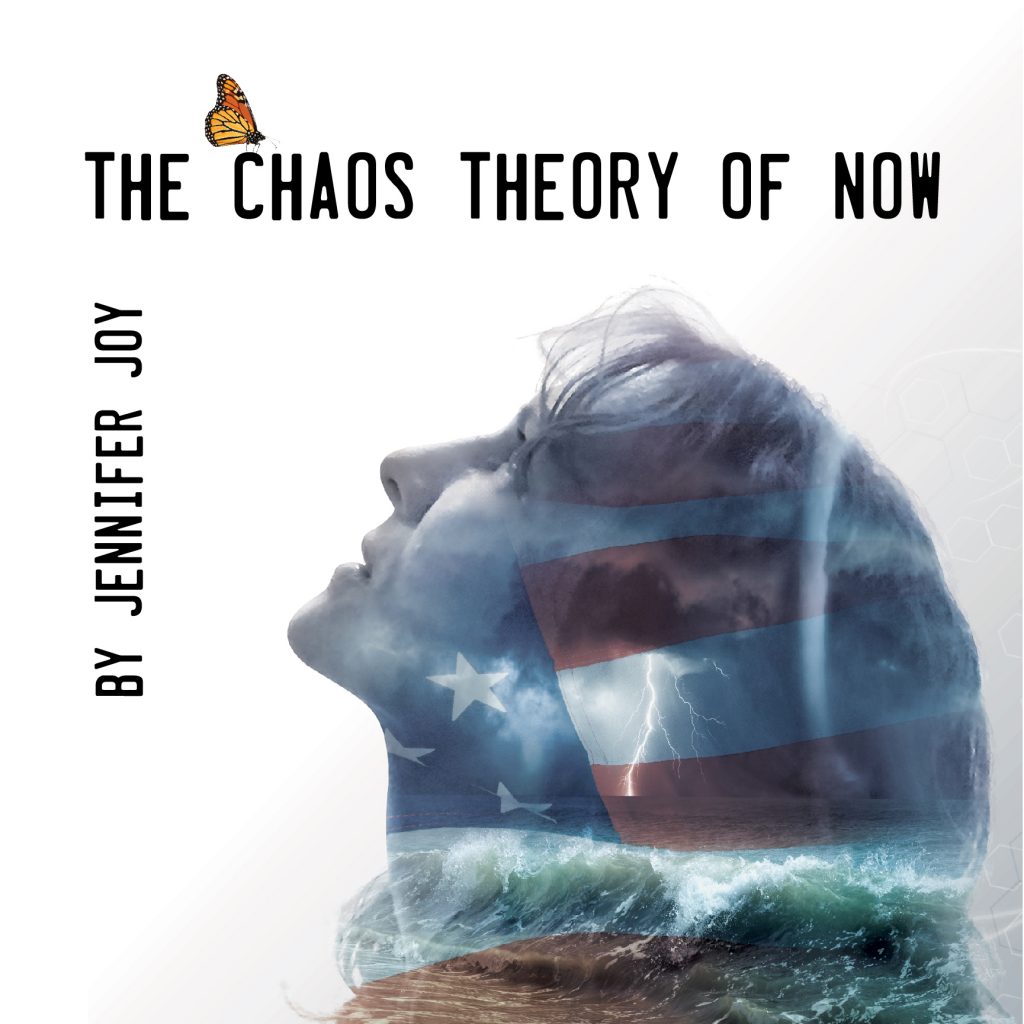 In this intelligent and entertaining solo play, performer and science maven Jennifer Joy mashes up chaos theory with a Trump-voting farm wife, a liberal rural politician, a teen punk Antifa activist and more. Inspired in part by her own far-right Republican farm family, Jennifer reveals how we got to this point - and what's next.

"...Everyone in New York should see this brilliant work of art."
William Cataldi, Hi Drama
*Scroll down for more of this review*

"...you may want to see it twice. This is the joy of great theatre."
-Sherri Rase, Qonstage
Click here for the full review.

The Chaos Theory of Now
By Jennifer Joy

Jennifer Joy is a lesbian New York transplant, hailing from a Midwestern farming background, with a penchant for performance art and science. She begins her one-woman show, The Chaos Theory of Now, with a description of the Big Bang origin of our universe and an enthusiastic discussion of the Chaos Theory science uses to explain much of the narrative of time and space. But this isn’t a show about science. Joy employs Chaos Theory as the glue to explore four women she could have become if the variables in her own past had been even infinitesimally different. What could the possibilities have been for the seedling, Jennifer Joy, to become adult in Trump’s America?

She explains that all of her siblings (her family was Catholic) became evangelical christians, and she is therefore estranged from them. She broke with her family over her sexuality and her education, and moved to New York, but not before she inherited a deep understanding of life for evangelical farmers. She plays four women, shifting deftly amongst them; one Catholic Minnesota farmer; one evangelical home schooler; one married, Midwestern lesbian, Democratic politician; and one leftist, loud late-teenager. As becomes clear during the performance, she has a profound understanding of all of these characters, and therefore of life itself.

Consult with any good creative writing teacher and ask them, “What should I write about?” They will tell you immediately, “Write what ‘ya know.” Clever writers learn eventually to write mainly about the one thing they know the most about—themselves. I love plays written by playwrights writing about themselves. They write with unmatched passion, insight, and intelligence. Jennifer Joy is not just a clever writer—she’s brilliant, because she devoted her entire 90 minutes to a rich exploration of her own psyche and its possibilities.

We currently live in a world in which everyone has become a stereotype. The Right has forced all of us to take sides in a culture war writ large. All of us are either MAGA Trump supporters, or liberal, Trump haters. It’s virtually impossible not to be dragged into the game. Jennifer Joy and her four other selves (which makes five) start out as stereotypes. Joy is a liberal New Yorker; her evangelical home schooler buys her own religious propaganda with ease—Trump is her savior, ushering in the end times. Soon, however, the characters, and therefore herself, become far more complex, having to deal with the realities of the world. Liberal New Yorkers don’t love evangelical Christians, but Joy does. She does not play these women without loving them, without empathy. After all, they are all variations of herself, each inhabiting an alternate universe...

Jennifer Joy understands something about the human condition which people rarely understand fully. Most people think their selves are automatically coherent and singular. I am I. In reality, my six years old I is still with me. So is an angry maniac. So is the homosexual I; the working class I; the intellectual I; the gentle, loving, kind I. I actually consist of many selves (psychological forms) which make up a self-divided, conflicting, complicated self. Unity consists of constant negotiation amongst the many selves to attempt to create ego coherence. Jennifer Joy brings her own incoherence into her performance for us to see. She THANKFULLY offers her audience an opportunity to experience the current world in a much more realistic and beautifully complex way.

She deserved the standing ovation most of her audience gave her. Her director and set and sound designers did a fine job of showing her off... Her writing was some of the finest I’ve seen...

Everyone in New York should see this brilliant work of art. If you can fit in a performance—go. Jennifer Joy Pawlitschek has a lot to teach us all. And her efforts might make the world a better place for everyone. May it go on to a full production. HAPPY FACE PLUS